President Trump, in a joint news conference with President Vladimir V. Putin of Russia in Helsinki, Finland, on Monday, dismissed his own intelligence agencies’ conclusions that Russia meddled in the 2016 election. “I have President Putin,” he said. “He just said it’s not Russia.”

WASHINGTON — President Trump, who gleefully defies the norms of presidential behavior, went somewhere in Helsinki, Finland, on Monday where none of his predecessors have ever gone: He accepted the explanation of a hostile foreign leader over the findings of his own intelligence agencies.

Mr. Trump’s declaration that he saw no reason not to believe President Vladimir V. Putin when he said the Russians did not try to fix the 2016 election was extraordinary enough. But it was only one of several statements the likes of which no other president has uttered while on foreign soil.

In the fiery, disruptive, rules-breaking arc of Mr. Trump’s statecraft, his assertions during a news conference with Mr. Putin marked a new milestone, the foreign policy equivalent of Charlottesville.

Just as Mr. Trump flouted the most deeply held traditions of the American presidency in equating the torch-wielding white nationalist marchers and the activists who fought them last summer in Virginia, he shredded all the accepted conventions in Finland of how a president should conduct himself abroad.

His statements were so divorced from American policy goals, so at odds with the rest of his administration, so inexplicable on so many levels that they brought to the surface a question that has long shadowed Mr. Trump: Does Russia have something on him?

The president’s motive, it seemed, was to fight, tooth and claw, for the legitimacy of his victory in the 2016 election. In the process, he impugned the nation’s law enforcement agencies and publicly undermined the consensus view of its intelligence agencies that Russia interfered in the campaign.

When asked whether he would use his news conference with Mr. Putin to denounce Russia for its behavior, Mr. Trump acknowledged that his own director of national intelligence, Dan Coats, and other senior officials had told him that Russia was culpable.

But, the president declared, “I have President Putin. He just said it’s not Russia.” He added, “I will say this: I don’t see any reason why it would be.”

The heads of the national security agencies on Thursday said that Russia was still trying to influence United States elections, contradicting statements made by President Trump.

Then he unleashed a fusillade of accusations about Hillary Clinton and her missing emails, the F.B.I., the D.N.C.’s unexamined computer server and the testimony of the F.B.I. agent, Peter Strzok. He also offered a defiant defense of his “brilliant” presidential campaign, reminding reporters of the Electoral College tally, 306 to 232.

To a domestic audience, these assertions were familiar — the grist for countless early-morning Twitter posts or stream-of-consciousness outbursts during “Make America Great Again” rallies. But to hear Mr. Trump utter them while standing next to the leader of the very country accused of carrying out those attacks was a spectacle of an entirely different order.

“No prior president has ever abased himself more abjectly before a tyrant,” Senator John McCain, Republican of Arizona, said in a statement. “Today’s press conference in Helsinki was one of the most disgraceful performances by an American president in memory.”

John O. Brennan, who served as C.I.A. director under President Barack Obama, wrote on Twitter: “Donald Trump’s press conference performance in Helsinki rises to & exceeds the threshold of ‘high crimes and misdemeanors.’ It was nothing short of treasonous.”

Even Mr. Coats pushed back, issuing a statement saying that the intelligence agencies would stick to their assessment of “Russian meddling in the 2016 election and their ongoing, pervasive efforts to undermine our democracy.”

Historians, however, said Yalta only dramatized the depth of Mr. Trump’s failure in Helsinki. Robert Dallek, who wrote a recent biography of Roosevelt, noted that Republicans faulted the 32nd president for appeasing Stalin in 1945. But Roosevelt, he said, had a far weaker hand — with the Red Army already occupying Eastern Europe — than Mr. Trump had.

“Roosevelt was dealing with the harsh realities that were coming out of World War II,” Mr. Dallek said. “We have no clear idea, but lots of guesswork, about why Trump seems to be so much in the pocket of Vladimir Putin.”

As he did after white supremacists beat their opponents in Charlottesville, Mr. Trump reached in Helsinki for a kind of moral equivalence.

“I hold both countries responsible,” he said, when asked whether he blamed Russia for anything. “I think that the United States has been foolish. I think we’ve all been foolish. We should’ve had this dialogue a long time ago — a long time, frankly, before I got to office.” 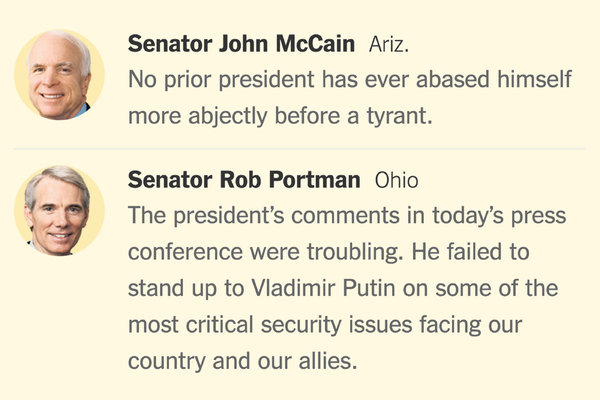 Reports of the president’s comments prompted outcry from some lawmakers, but they were followed by notable silence from others.

While the president lashed out at all manner of domestic enemies, he said nothing about Russia’s annexation of Crimea, its predatory behavior toward Ukraine, its bloody intervention in Syria or the alleged poisoning of a former Russian spy on British soil.

So disorienting was Mr. Trump’s performance that at times, it fell to Mr. Putin to try to cushion the blow — as if he recognized the damage that the president’s remarks would cause in the United States.

When a reporter asked whether Mr. Trump had objected to Russia’s annexation of Crimea in 2014, Mr. Putin answered that of course the American president had objected. Mr. Trump stood by in silence.

Mr. Putin made clear that he had rooted for Mr. Trump to win the election. “Yes, I did,” he said. “Yes, I did. Because he talked about bringing the U.S.-Russia relationship back to normal.”

Yet on perhaps the most unsettling question of all — whether Russia possessed compromising material on the president — Mr. Putin offered Mr. Trump no comfort. Instead of simply saying it did not, Mr. Putin said he was well aware of the rumors, but that he had not been told that Mr. Trump had visited Moscow as a private businessman. And anyway, he added, hundreds of American business people visit Russia every year.

“Do you think we try to collect compromising material on each and every single one of them?” Mr. Putin asked.

Body found at SoCal mansion may be suicide

Why Was a Citizenship Question Put on the Census? ‘Bad Faith,’ a Judge Suggests

Atheists say they get kudos for church billboard