Katie Porter, right, a progressive Democrat running for Congress in California, at her election night event in Irvine, Calif., on Tuesday. She advanced to the general election over a more business-oriented Democrat.

WASHINGTON — Democrats enhanced their prospects for winning control of the House with Tuesday’s coast-to-coast primary results, skirting potential calamity in California and lining up likely gains in New Jersey and possible victories in Iowa and New Mexico.

The Democratic Party had feared disaster in California, where a quirky “jungle primary” gives the November ballot to the top two finishers, regardless of party. But Democratic contenders there leveraged financial and strategic help from the national party to weather the winnowing primary, and ensure that they will field candidates in multiple districts that they will most likely need if they are to win control in November.

“Even though Democrats had to spend a few million dollars, crisis averted,” said Nathan Gonzales, a veteran House race handicapper and the editor of the Inside Elections newsletter.

Republicans avoided their own worst-case scenario as well, securing a spot in the California governor’s race, which should help bring G.O.P. voters to the polls this fall to vote for their party’s House candidates. Republicans missed a slot on the ballot to challenge Senator Dianne Feinstein’s re-election bid, but a shutout in both California’s Senate race and its contest for governor could have severely depressed conservative turnout.

The Democrats had more on the line, and more to celebrate. They will be able to mount challenges in places where the party feared being shut out, including open seats near San Diego and Los Angeles and districts represented by Republican incumbents in Orange County, Los Angeles County and around Modesto. Between California and New Jersey, Democrats will contend for at least 10 Republican-held seats, nearly half of the 23 they need for control.

While California was the focal point of Tuesday’s voting, New Jersey was one of a handful of other states where the battle for the House was also joined, including Iowa and New Mexico.

In New Jersey, Democrats settled on well-funded candidates who they believe are likely to prevail in elections for seats being vacated by Representatives Rodney Frelinghuysen and Frank A. LoBiondo. They also intend to mount serious challenges to two incumbents, Leonard Lance and Tom MacArthur, the latter a lawmaker who has closely aligned himself with President Trump.

“The results last night not only in California but in New Jersey, Iowa and New Mexico ultimately come down to really strong Democratic candidates getting through with pretty overwhelming support in states where the voters weren’t split among multiple candidates,” said Meredith Kelly, the communications director for the Democratic Congressional Campaign Committee.

Republicans saw some positive developments Tuesday as well. In the California governor’s race, John Cox, a Republican, secured a spot on the ballot to face Gavin Newsom, the Democratic lieutenant governor.

In an early-morning tweet Wednesday, Mr. Trump embraced Mr. Cox and tried to counter the widely prevailing view that Democrats had dodged an electoral bullet.

“Great night for Republicans! Congratulations to John Cox on a really big number in California. He can win,” Mr. Trump tweeted. “So much for the big Blue Wave, it may be a big Red Wave. Working hard!”

In addition, congressional Republicans were enthusiastic about their own contenders in California, including Young Kim, a Korean-American woman who was the top vote-getter in the primary to replace Representative Ed Royce, another retiring Republican in a district that is nearly 30 percent Asian.

Another female candidate, Diane Harkey, was the top vote-getter in the San Diego County district being vacated by Representative Darrell Issa.

While Democrats managed to push their candidates through the dicey process, their success in the California races is not guaranteed even though at least seven Republican-held districts in play were carried by Hillary Clinton in 2016. Despite opposition to Mr. Trump, the districts remain dominated by Republican voters. And Democrats did not always get their preferred candidate, with more progressive challengers prevailing in some districts.

For instance, Democratic voters in Orange County picked Katie Porter, a law professor and strong progressive candidate, over the more business-oriented Dave Min to face Representative Mimi Walters, a Republican in her second term, in November. Orange County, south of Los Angeles, is undergoing a demographic transformation as Asian and Latino migrants settle in what was once a pillar of the Ronald Reagan-era Republican Party. But while some suburban voters there may be uneasy with Mr. Trump, the county is hardly a bastion of liberalism.

“I’m not convinced that voters are going to punish Mimi Walters and Dana Rohrabacher because they don’t like the president,” said Mr. Gonzales, referring to two California Republican incumbents at risk.

Democrats, though, vowed to use Ms. Walters’s support for the tax overhaul against her, noting that the cutbacks on mortgage interest and state and local tax deductions had hit many in the affluent district.

“We’re going to go right at Walters for voting to raise taxes on half of the homeowners in her district,” said Sean Clegg, a California-based strategist for Ms. Porter.

Democrats were threatened by an embarrassment of riches in California arising from a strong backlash against Mr. Trump. The environment created a golden opportunity to win a seat in Congress, and the prospect attracted so many contenders in some cases that the party feared the candidates would divide the vote and open the door to Republicans winning the top two slots.

“House Democrats were braced for a rough night in California that would steepen their climb to the majority,” said former Representative Steve Israel, a Democrat who previously ran his party’s House campaign arm. “Instead, they had a good night that further clears their path.” 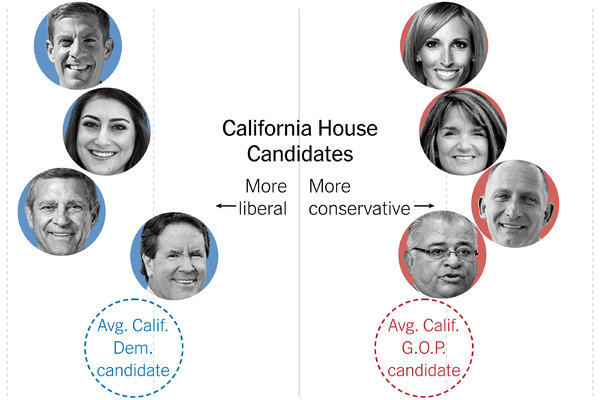 Democratic strategists in Washington deserve some credit for their efforts to knock down the biggest threats in California. In some instances, they picked Democratic candidates who were not supported by Emily’s List, the political action committee that backs women who support abortion rights, and in others they split with the state party. National Democrats also pumped in money to knock down a second-tier Republican, clearing the field for Democrats to fight it out for second place.

“This confirmed that being proactive in these races could yield the results that we wanted,” said Representative Judy Chu, Democrat of California.

For example, the House Majority PAC, the main Democratic “super PAC,” unveiled an advertisement in the last weeks against Scott Baugh, a Republican running in the district represented by Mr. Rohrabacher. The super PAC understood that it could not take out Mr. Rohrabacher, but it needed to make sure the badly divided Democratic candidates would not leave the November ballot open for him.

And in the seat held by Mr. Issa, who is retiring, the House campaign arm recognized that a moderate Republican assemblyman, Rocky Chávez, posed a threat and unleashed an ad campaign that attacked him from the right as part of an attempt to drive his fellow Republicans away from him. It worked: Mr. Chavez appeared likely to finish in sixth place, and Democrats were three of the top four vote-getters in the district.

In the end, the D.C.C.C. and a pair of Democratic political action committees working jointly, the House Majority PAC and Priorities USA Action, spent over $7 million to knock down Republican candidates and lift their own contenders in three districts: Mr. Rohrabacher’s, Mr. Issa’s and Mr. Royce’s. In all three, a second Republican faded in the final results.

At the same time, the D.C.C.C. backed Gil Cisneros over the chosen Emily’s List candidate, Mai Khanh Tran, in Mr. Royce’s district, figuring a Navy veteran and Latino had a better shot than an immigrant pediatrician in a district that has been represented by a Republican for years. Ultimately, three women backed by Emily’s List in targeted districts — Ms. Tran, Virginia Madueño and Sara Jacobs — appeared to have lost to men.

Even if they had been shut out of some of the California contests, Democrats still would have had a national path to winning the two dozen seats needed to take over the House in January. But being frozen out of races in winnable Republican-held districts would have been a major disappointment for Democrats and could have sapped some of the enthusiasm they will need to generate over the coming months.

“Democrats have to be happy and relieved,” said Dave Wasserman, House race analyst for the nonpartisan Cook Political Report. “They have woken up from their nightmare of lockouts, and everything is O.K.”

The Democratic success could affect activity in Congress. Faced with the need to protect endangered Republican incumbents in California, House Republican leaders may determine that they have to move forward with a vote on immigration policy being demanded by Republican centrists who believe the issue is critical to their campaigns.

Student Says He Stole TVs to Help Pay for Prom

Woman has baby after husband, a deputy, is slain