President Trump touring a steel mill in Granite City, Ill., in late July. Economists are quick to point out that presidents of both parties are assigned more credit or blame than they deserve for the economy.

By nearly every standard measure, the American economy is doing well — and better than it was a year and a half ago, before Donald J. Trump was elected president. If only the debate over who deserves most of the credit were as easily judged.

Americans’ perceptions of the economy’s prospects increasingly depend more on their political identity than statistics on output or stock markets. So each new economic report — whether the latest monthly jobs figures or the quarterly growth estimate — reignites the feud between Trump supporters and critics.

The same gauges that illustrate this administration’s economic successes also make clear that they are built on the achievements of the previous one, and that the economy is following the upward trajectory begun under President Barack Obama.

Economists are quick to point out that presidents of both parties are assigned more credit or blame than they deserve for the economy, a colossus whose course is fashioned, bit by bit, from innumerable decisions made every day by investors, consumers, managers and merchants around the globe.

Even so, Mr. Trump — through a combination of skill and circumstance — has been better able than his predecessor to spotlight the economy’s gains, political scientists say. And his message never varies, no matter what the numbers show: an economy that was ruinous under Mr. Obama is “amazing” under his own leadership.

The salesmanship seems to have had an impact. Business and consumer sentiment are higher than before the election, and the share of the public that says the economy is improving has grown, according to Gallup surveys.

At the same time, however, both presidents have had trouble transforming their economic successes into more general support. For presidents as far back as Dwight D. Eisenhower, Mr. Obama is the only one whose approval ratings fell as consumer sentiment rose, said Lynn Vavreck, a professor of political science and communication at the University of California, Los Angeles, and a co-author with John Sides and Michael Tesler of a coming book on the 2016 presidential campaign.

And although it’s still early, Mr. Trump looks to be headed in the same direction, Ms. Vavreck said. Sunnier views of the economy have so far failed to raise Mr. Trump’s approval rating above 50 percent.

What Mr. Trump has been particularly well positioned to do, though, is identify himself with economic success. He made his name as a celebrity tycoon. “It dovetails with a narrative about Donald Trump that has existed for a long time: that he’s a businessman, that he understands the working of the economy, that he knows how to make money,” said Mark Rozell, dean of the Schar School of Policy and Government of George Mason University in Virginia.

Mr. Obama’s background was in community organizing and the public sector. “No one expects such a person to have any feel for creating good economic conditions,” Mr. Rozell said. “He is more likely to be seen as riding an economic wave or trend, whereas the businessman is seen as responsible.”

Circumstances have also provided Mr. Trump with a tailwind. He has benefited from an additional year and a half of economic growth, which compounds the perception of the economy as resilient. The nine-year expansion has endured in the face of disruptions — from a global slowdown to trade tensions and unpredictable policy pronouncements.

Even if individuals are unaware of most details, the high confidence scores reflect the collective evidence and evaluations that the economy is hardy, said Tyler Cowen, an economist at George Mason University. “Markets aggregate information,” he said.

The extended recovery is naturally digging deeper. The Labor Department reported that joblessness fell to 3.9 percent in July, near the 18-year low it reached in May. The least educated workers — who have received the smallest share of the recovery’s rewards — were hired in greater numbers, while traditional industrial sectors like manufacturing that have suffered from decades of losses, added jobs.

Steep corporate tax cuts have raised longer-term worries about bloated deficits, and an anti-regulatory stance troubles watchdogs who warn that health and safety risks will increase. But in the short term, those actions have temporarily quickened the pace of growth, pumped money into the economy and buoyed business confidence.

Republicans — led by the president and his Twitter feed — have relentlessly reaffirmed his economic message with superlatives, capital letters and exclamation points. During the campaign, Mr. Trump declared, “I will be the greatest jobs president that God ever created.” On tour this month for Republicans running in the midterm elections, he tweeted: “Pennsylvania has to love Trump because unlike all of the others before me, I am bringing STEEL BACK in a VERY BIG way.”

That exuberance has included claims by the president that sometimes go beyond the economic facts in portraying a turnaround on his watch. But the net effect has been to outshine the economy’s weak spots, like sluggish wage growth, income inequality and the erosion of middle-class jobs — factors that contributed to Mr. Trump’s election and still exist.

The Democrats were less adept at rounding up credit for economic improvements and shaking off criticisms. “Part of Obama’s problem, especially in the last year, was that he was too understated,” said Larry J. Sabato, director of the University of Virginia’s Center for Politics. “In every instance, he downplayed it. It was ‘Just the facts, ma’am.’ That doesn’t work anymore.”

A widening political gap hovers over all these developments. Views of the economy have always been shaped by concrete conditions as well as party affiliation, said Jonathan Rothwell, senior economist at Gallup, the analytics and consulting firm. 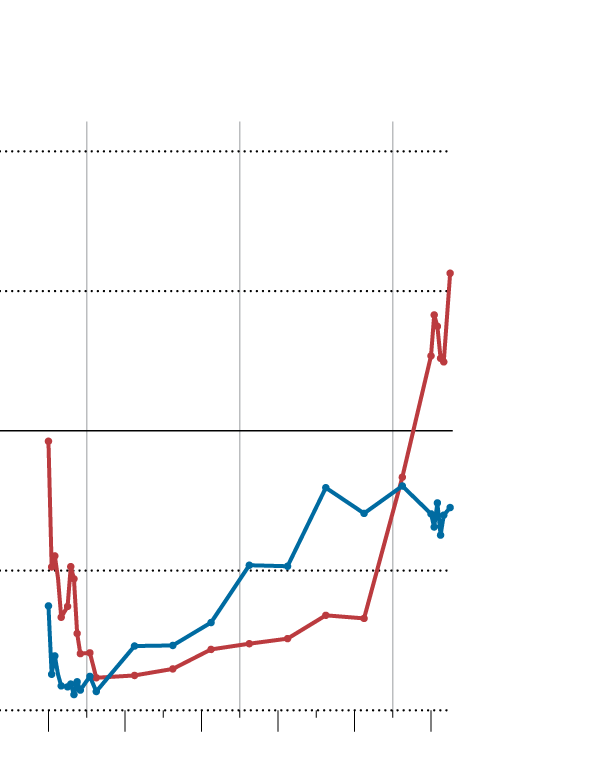 conditions in this country as excellent or good. 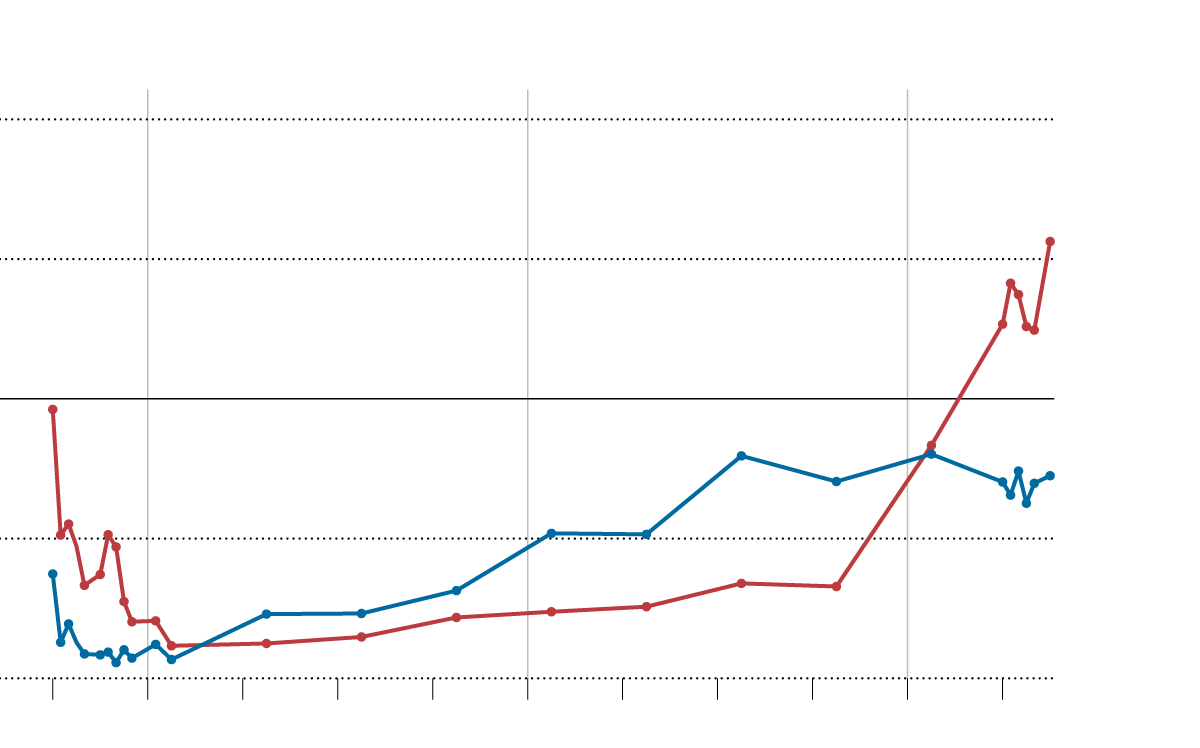 Share of respondents who would rate economic conditions in this country as excellent or good.

“What partisanship does is reset the baseline to be positive or negative depending on whether your party is in power or the other party,” Mr. Rothwell said.

The partisan fracturing that emerged after Mr. Trump’s election has been particularly striking and persistent.

“Republicans and Democrats held much more extreme views under Trump than under past administrations,” Richard Curtin, director of the University of Michigan’s monthly survey of consumer sentiment, writes in a new paper scheduled for release in September.

According to a survey conducted in early July for The New York Times by the online polling firm SurveyMonkey, 76 percent of Republicans said the next year would bring very good or somewhat good times for the country economically, compared with 12 percent of Democrats.

Mr. Trump looms so large that it’s tempting to focus solely on the impact of his can’t-take-your-eyes-off-him persona, which elicits extreme reactions. And he revels in being a polarizing figure.

Roots of the deepening partisan divide around the economy reach further back, however. The small difference in Democrats’ and Republicans’ perceptions of the economy that existed during the Reagan and Bush administrations doubled during the Obama years, Mr. Curtin said. The gap doubled again under Mr. Trump, with Republicans shifting their views in greater numbers than Democrats.

Whatever role personal style and leadership may play, Mr. Curtin argues that wage stagnation and income inequality, particularly among less educated workers, have contributed to the partisan rifts of the last decade. The largest fissures between Republicans and Democrats are among less educated lower- and moderate-income households.

Many of these households turned to Mr. Trump in 2016, and continue to express faith in his ability to better their economic fortunes.

Ms. Vavreck of U.C.L.A. argues that differences around race and ethnicity issues have amplified the partisan divide as views on immigration and diversity increasingly fall along party lines. This has spilled over into appraisals of the economy. That could be part of the reason for the unusual disconnect between favorable economic news and approval ratings for both Mr. Obama and Mr. Trump.

Historically, sentiments about the economy could build up or chip away at a president’s support, Ms. Vavreck said, but no longer. “In a polarized age,” she said, “Americans may give little credit to a president not of their own party.”

Christopher Bailey Takes a Final Walk Down the Burberry Runway

Is the Populist Revolt Over? Not if Robots Have Their Way

Trump Blasts Fed, China and Europe for Putting U.S. Economy at a Disadvantage